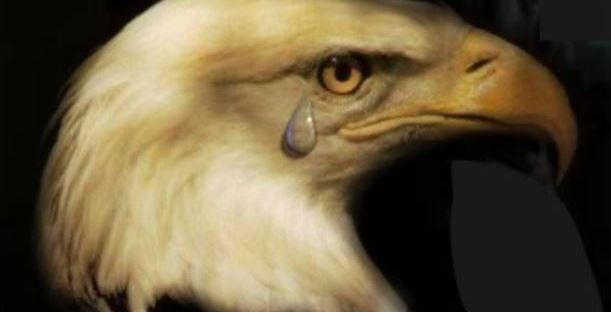 Sooner slipped quietly out of his nest, as the sun rose over Jerusalem that early Good Friday and mounted up with his young eagle wings through the glorious, brisk breeze.  His wings carried him high and far over those beautiful hills — the sky as blue and clear as a sapphire.

Sooner hoped that, if he arose early enough, he might catch another glimpse of the Man who rode into Jerusalem a week ago on that colt.  He was curious about this Man the people praised, as he rode in — waving their palm branches and shouting, “Hosana!”  He appeared, as though royal…yet, on a colt?  Who was He?  Sooner had to know.

So, he searched the city far and wide gliding on his new wings — he barely believed they could carry him out, peaceful soaring — he hardly could believe they would work when his Momma pushed him out the nest.  Oh, the experience was harrowing as he fell endlessly that first time — but Momma swooped in and caught him and carried him back to the nest.  She patiently and lovingly told him, “Tomorrow will go much easier for you Sooner, you’ll see!”  Then, Sooner cried to her, “Momma, I’m so frightened!  Why can I not just stay here with you?”

Momma looked sweetly on Sooner, her only boy in the whole clutch — she knew he would be great one day and she rested all of her hopes in him.  She soothingly said to Sooner, “Boy, God has a big plan for your life and  you must spread those wings and fly to His bidding…do not fear the plans He has for you.”

He continued to soar looking for this royal Man to see Him again. Almost out of no where, he heard a sound that was whizzing and slapping so he flew in that direction.  What he found there ripped through his heart and it pained him — a pain he had never experienced before — it was the royal Man — but he was being beaten by the Roman soldiers.

There was so much blood, so much pain and Sooner did not understand what this man could have done — One so welcomed and praised only a week ago — what could this be?  Sooner found a perch, high above the court yard of Pilate’s palace, and with great grief watched, as the soldiers beat and ridiculed this man they kept calling Jesus.  The whip would come down and drag across his body and this Jesus would cry out in pain from each lash.  How could this be?  After what seemed like hours of beating, they began mocking Him, spitting on Him, and pulling on His beard — plucking out His whiskers — His face was bleeding and swollen — and when Sooner thought they would show Him some mercy, another soldier walked over and placed a crown on Jesus’ head with the same briary thorns his mother told him to avoid when hunting prey — for they were very long and sharp and if they pierced his chest, he would certainly die.

The soldier placed it on this Jesus’ head and pressed down, as hard and deep in His skull — more blood — more pain.  Then they found a purple robe and placed it on His shoulders and walked around bowing and mocking — calling Him the King of the Jews!  As if it all weren’t enough, they led Jesus off to a crowd — the people of the town — and stood Jesus before them — flaunting their King.  They rejected it — they said, “He is not our King — Caesar is our King!”  Then Pilate walked out and stared at the crowd — amazed at their insolence and distaste for the one they praised a week ago.

With a nod from Pilate, Sooner saw the soldiers bring another man out and Pilate shouted, “Today I will release one — whom shall you choose?  Here is Jesus — here is Barabbas — whom shall I release to you?”  The crowd roared loudly, “Give us Barabbas! Give us Barabbas!”  So, Pilate asked them, “What shall I do then with your King, Jesus?”  And, they exploded, “Crucify Him!”  Pilate was perplexed — for even he knew Barabbas was a murderer.  Pilate walked to a basin of water and washed his hands and said, “I will not bear this on me — it is on you.”

The soldiers then took a long wooden beam and thrust it on Jesus’ back and led Him out of the palace.  Sooner leaped from his perch and flew over-head to see where they were taking Jesus.  He followed closely, as Jesus struggled with each step along the path to the Place of the Skull, Sooner’s mother had told him about.  When they reached the top, they ripped that purple robe off of His back and the wounds tore and Jesus cried out in such pain.  They laid Him on the earth and to Sooner’s horror, they began nailing Him to that tree — His hands, His feat — and their He hung and Sooner flew to the cross beam and cried.

Jesus died that day — the King of the Jews — the promised Messiah.  Sooner understood that it was for the sins of the people that this Royal Blood was spilled — Jesus their Savior.

Sooner stayed with Him until He arose three days later — and, as Jesus ascended to Sooner’s Creator, His Father — Sooner laid down and died.

Azalea Trees and Tea Rooms was born out of an idea from a dear relationship I had with a Sister in Christ. We would walk the streets of Richmond, Virginia to exercise after work and during that time we spent much time praying and growing in Christ Jesus. We would frequent Mrs. Morton's Tea Room, along with other restaurants in the Fan area of Richmond and would admire the beautiful Azaleas along Monument Avenue. I mistakenly called them Azalea "Trees" one day and well, there you have it. I invite you along for stories, lessons, and a holistic approach to living organically and authentically in the HOPE of Jesus, as I experience through the Gospel and life and share my heart with you. View all posts by tameasa